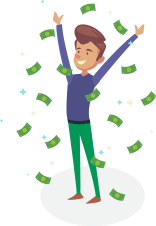 You’ve heard of USA Powerball and Mega Millions. But what do you know about Euro Millions?

Euro Millions is Europe’s answer to Mega Millions and the Powerball. It is one of the most famous lotteries in the world, and the biggest of its kind in Europe.

Sure, there are a couple of other European lotteries that have been in the news lately – the France Lotto and the El Gordo of Spain. But none of them have the heft, lucre or the scale of Euro Millions.

Euro Millions has a very good record when it comes to cash payouts. This lottery has been churning out one massive jackpot after another. There is a real craze for Euro Millions Lottery Tickets in the online world.

You can play Euro Millions Lottery Online at onlinelottery247.com. Click here to buy a Euro Millions ticket. You can buy one for just €2.95.

Read on for more about this famous European lottery.

Let’s start with the one thing you want to know more than anything else.

How Big are the Euro Millions jackpots?

Euro Millions does have large jackpots, but not as big as those get with USA Powerball and Mega Millions. The biggest Euro Millions jackpot so far was €190 million ($216 million).

Now, that’s good money for most people and will set you up for life. But this is nothing in comparison to the $1.5 billion plus jackpots churned out by USA Powerball and Mega Millions.

Still…that wouldn’t really bother you if you win a cool $200 million on Euro Millions, would it? ????

EuroMillions was first launched in February 13, 2004. It is an offshoot of Française des Jeux, which is France’s biggest lottery.It is a European lottery with a European character.

As you know, Europeans like to keep things small and compact, while Americans want everything oversized. Perhaps that is the reason why the operators of this European lottery have capped all of their jackpots at €190 million.

Where are Euro Millions Draws Held and When?

Euro Millions draws are held across Europe. Spain, Britain and France are the founding members of this lottery. The membership has now been extended to Luxembourg, Austria, Belgium, Switzerland, Portugal, Ireland and Liechtenstein, Monaco, the Isle of Man and Andorra.

EuroMillions draws are held on Tuesdays and Fridays every week in Paris at 20:45 CET. The bets must be placed before 20:30 CET (15 minutes before the draw).

What’s the Price of a EuroMillions Ticket?

Just €2.95. Not a big deal really, considering you could win the jackpot of €190 million with that, if it’s your lucky day. Go ahead and calculate the ROI on that!

The jackpot is not the only prize available with this lottery. There are a number of second-tier, third-tier and consolation prizes in addition to that, ranging from just €20 to a cool €400,000.

What are the Odds of Winning the Euro Millions Jackpot?

Well, the bad news is your odds of winning the EuroMillions Jackpot are 1 in 139,838,160.  The good news is that you have the same odds as just about anyone in the world!

That’s the thing about fair and transparent lotteries such as Euro Millions. The numbers are picked totally randomly. There is no special way or a particular secret to give yourself an edge over other players. All you can do is buy as many lottery tickets as possible so that you will have a slightly better chance.

That’s cool. But what if I’m from outside Europe? Am I allowed to participate in the Euro Millions Lottery in that case? If yes, how?

Good question! Yes, it is true that only residents of countries where Euro Millions draws are held can participate in this lottery.

… We live in the days of the internet after all. So, there are ways and means to legitimately participate in Euro Millions and be able to claim your winnings should you win the lucky jackpot or any other prize.

Online lottery sites have completely transformed the way lotteries are played across the world and onlinelottery247.com is without question one of the very best in this niche.

We have made it possible for just about anyone to participate in Euro Millions lottery, no matter where they are from the world, and collect their winnings quickly, safely and easily should they win any prize – even the jackpot.

We have partnered with many local European lottery agents, who are based in the countries where the Euro Millions draws are held.

When you buy a ticket on this site, a matching physical ticket is purchased almost immediately by one of our local agents. You will be provided with an electronic copy of the same by email.

Your number goes into the draw. If you win anything at all, we shall inform you immediately by email with instructions on what to do next to claim the prize.  Don’t worry, you don’t have to do much, our lottery agents take care of all the details. Relax, take your spouse to dinner and watch the money come into your bank account!

So, How to Play Euro Millions?

Step #1: Set up your account on ABC.com. It’s quick and easy and we don’t ask any unnecessary details.

Step #2: Visit the EuroMillions page on this site. Buy 1 or more tickets.

You can opt for the random number generator called Quick Pick, which chooses the numbers on your behalf.

Wait for the Euro Millions draw. If it is your lucky day, you will win something.

Lotteries are a game of chance. They are completely random, which why they are called lotteries in the first place. Your odds of winning the EuroMillions Jackpot are 1 in 139,838,160 – but at least they are just as good as anybody’s!